The phases of iPhone ownership, the hazards of love.

We get up to the part where she's lighting the candle and my phone stops recording - "Your phone is full, please manage storage under blah blah blah...". This is an iPhone 6+, bought it two months ago. Obviously I bought the 16GB model, but this was never a problem with my 5c so why would it be a problem with the 6+?

It has been a problem with my 6+. I just deleted all my music and podcasts off of the phone less than a week ago, and as you can tell from the screenshot, whatever is on here does not add up to 11.something GB of stuff. Not to mention, why is there only 11.something GB of available storage in the first place. The OS is taking up over a quarter of the disk space?? 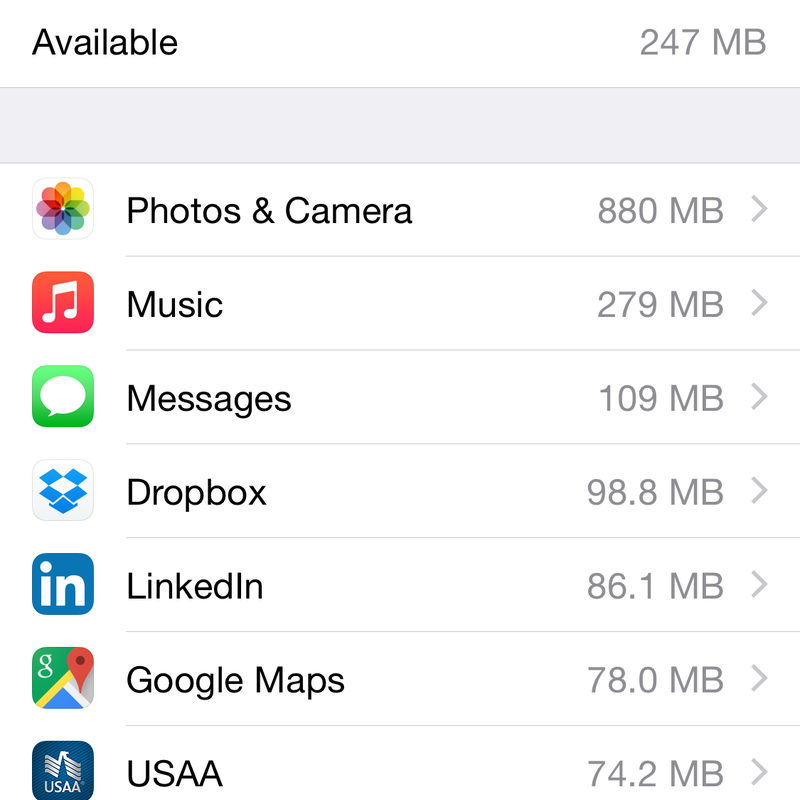 So I'm googling last night, trying to figure out what's taking up the space on my phone. Obviously something is cached it would seem to me, but I have no control over what this is or how to free up that space. Some random post advises me to backup and restore the phone, which seems really janky to me, but the poster says this will wipe the cached stuff and only leave "your stuff". I decide to try it, even though I'm respecting myself a little less at this point (I'm a developer for pete's sake, not some non-technical moron who has to search the internet for how to free up storage on his phone. Or am i??).

I'm told by iTunes that I don't have enough free space on the phone to restore from the backup I've just made. I'm wasting my life being frustrated at a phone at this point, rather than spending time with my wife on our son's birthday.

I have a moment and I remember why I jumped to Apple gear in the first place...

After years of loyalty as a Windows user, after years of hating Justin Long's smug pre-hipster persona as the cool kid in the commercial opposite John Hodges, I bought a new HP laptop with Windows Vista on it. I felt betrayed. It was such a poor, clunky experience that I immediately regretted buying the laptop. Two weeks later I bought an iPhone, as chronicalled in part 1 of this series. It was, I can honestly say, life changing. It just worked. It didn't nag me, it didn't crash, it didn't hide useful features behind 3 submenus, it just worked. It catalyzed the entire career path I've been on for the 7 years since I bought it.

You can guess where this is going. My iPhone 6+ is no longer a device that "just works". It does the exact opposite and costs me video of my 5 year old's birthday. I guess Marco Arment wrote about this a month ago, but I'm officially done paying this much money to be frustrated by technology.

I'll go ahead and say it - if Jobs were still alive, he would've fired the motherfucker who even suggested shipping their top-of-the-line phone with only 16GB of storage, not only because it makes for an obviously crappy user experience but because he had an apparently much clearer long view - that happy customers keep coming back and unhappy customers flee at the first opportunity.

My first opportunity is in 10 months when my T Mobile jump plan comes back around. I'll probably go retro, since I have less than a home screen's worth of apps installed on this thing anyway. The only ones I actually really use are Email, Twitter, and Reddit, and arguably all of those on a phone are just ways to kill time when I could be enjoying the life around me.

Related stuff here
The phases of iPhone ownership, the hazards of love.